Not ready to order?

Instead, download Latif's FREE guide to ensure your sprinters (and sprint hurdlers) are correctly set in the blocks to maximize their ability to out-execute the competition from the start. It's free! 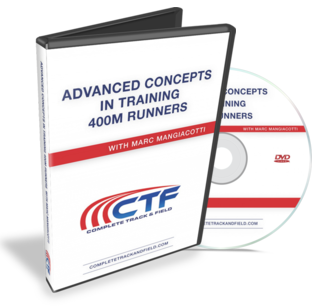 Take a look at how the program is formatted...

Marc Mangiacotti enters his third season as an assistant coach with the Crimson in 2014-15. He oversees the men’s sprinters and hurdles for Harvard, as well as serving as the recruiting coordinator.

Mangiacotti came to Harvard after a two-year tenure at Brown. During his time in Providence, R.I., he made a big impact on the Bears sprinters, coaching five Ivy League champions that combined for nine league titles. He also coached 15 athletes that earned All-Ivy League credentials and saw his group break four school records.

His time at Brown came on the heels of a highly successful stint at Wheaton College. In six years working with the Lyons, Mangiacotti’s athletes won eight NCAA national championships and earned 53 All-America accolades. His athletes also set 31 school record performances in sprints, hurdles and relay events, and he was named the U.S. Track & Field and Cross Country Coaches Association (USTFCCA) Division III national and regional women’s assistant coach of the year back in 2008.

Prior to coaching at Wheaton, Mangiacotti worked at the University of Houston for three years as the assistant cross country and track and field coach under the tutelage of former 100-meter dash world record holder and Cougar head coach Leroy Burrell. He was directly responsible for setting the daily workout schedule, and he also assisted with recruiting, managing meets, helping the team budget and arranging travel plans. He also earned a master’s degree in Sport Administration at Houston.

Mangiacotti got his start in coaching at Bridgewater State College. He is a USA Track & Field Level I and II certified coach in sprints, hurdles, relays, jumps and combined events. As a member of the Bears’ coaching staff, he worked with the sprinters, hurdlers, middle distance and jumps groups.

Mangiacotti graduated from Bridgewater State in 1998 with a dual bachelor’s degree in elementary and physical education. He was also a standout student-athlete on the cross country and indoor and outdoor track & field teams, earning All-New England honors in track & field his senior year.

Order the DVD containing 4 hours and 46 minutes of video and we'll immediately send you the 26 week sample programs, testing charts and specific warm up routines.