Discover Everything You Need to Know to Set New Personal Bests in the Shot Put, Discus, and Javelin!

If You Want To Register For A Throws Group, You're In The Right Place

Think About How Much You'll Learn From Our Diverse and Experienced Group of Throws Experts, Including...

(Featured Clinician) Darcy Wilson joined the Harvard staff as Assistant Coach in 2016 after coaching at Brown University since 2012. Before her stay at Brown she spent three years at UMass Amherst where she was responsible for coaching all the throwing events for men and women. At UMass, Wilson's athletes rewrote the record books, setting all-time bests in the discus, shot put, weight throw, and javelin. She also coached a hammer thrower to the NCAA Regional Championships and worked with several top post-collegiate athletes. Prior to UMass, Wilson coached at Keene State, where she coached an NCAA DIII national champion in the men's hammer throw. She also coached NCAA qualifiers in the men's javelin, women's javelin, men's weight throw, and men's hammer, as well as school records in the men's discus, hammer, shot put and javelin along with women's discus and javelin records. Wilson also coached at Keene High School, where she produced the New England record holder in the discus.

(Featured Clinician) Earned USATF Level II Coaching Certifications in Sprints, Hurdles & Relays and Throws. While at Robert Morris Univerity, Oven's group of throwers and sprinters saw greater success in his second season as four athletes qualified for the NCAA Regional Championships, two in the hammer, one in the javelin and one in the intermediate hurdles. During the indoor season Oven coached Kevin Argauer to an All-East Coast performance in the 35lb weight throw and during the outdoor season he guided Gabriella Rinehart to All-East Coast honors as a freshman in the women's hammer throw. Rinehart's throw at the ECAC Championships qualified her for the USATF Junior National Qualifying standard. Before Robert Morris University, he served a one-year stint at Slippery Rock University working closely with the throwers and developing three student-athletes into national qualifiers.

(Featured Clinician) After 8 years at Boston University, Delgado has returned to where he started his coaching career at Stonehill College where he was an Assistant Coach of the men's and women's track teams.  In his first season with the Terriers, he earned Women's Coaching Staff of the Year honors at the America East Indoor Championship and received the same recognition in 2012.  In that same year, he coached an athlete to a pair of All-American finishes in the high jump and an Olympic Trial qualification. 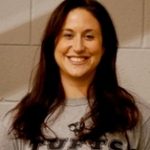 (Featured Clinician) Lisa Wallin LeClair enters her 11th year as the Throws Coach for the Jumbos. She and her husband, Jon LeClair, now in his 5th year as an assistant in the field events, both grew up in Lebanon, NH. Lisa and Jon have had incredible success at Tufts, coaching over 20 NESCAC and New England Champions in the throws, as well as numerous All-Americans in the shot put, discus, hammer throw, weight throw, and pentathlon, which include Kelly Allen (discus 163’6”), Ronke Oyekunle (shot put 45’0 ½”), Sabienne Brutus (weight throw 58’1”, hammer 178’7”), and Jana Hieber (pentathlon 3691). Most recently, the Tufts throwers scored 32 points at the 2015 NESCAC Championships, with sophomore Bailey Conner winning the shot put and freshman Amylee Anyoha winning the discus.

We will update and increase our staff list as registration numbers increase.

Click Here to see the rest of the Clinic Coaching Staff

(This list will be updated as the event group fills up and we add more staff to the roster.)