At last! A proven formula for developing specific endurance in your sprinters and hurdlers

Why Do Your Sprinters and Hurdlers Struggle to Execute Late in Races?

If your athletes struggle during these parts of their races, they lack the ability to specifically endure the Championship segment of their events.

Since you plan the training, their failure to execute when it matters may stem from errors you're making in your activity and exercise selection.

Running is not sprinting!

Sprinting is not running!

Let's say you can currently throw a fastball 90mph. You want to get it to 100mph. Do you think the solution is to spend the bulk of your time throwing large volumes of pitches at 75 miles per hour?

No because that would be dumb.

They half ass them. They run with terrible mechanics which only makes it more difficult to express speed and power during the times they really need to.

These times are called "meets".

QUESTION: How many days per week are your sprinters running in practice?

"Oh but Latif if they're not running enough they won't be in shape."

In shape for what, though?

What does "in shape" mean for sprinters and hurdlers?

What is all that running you're doing supposed to be accomplishing, exactly?

They're not running faster times because A) they're weak and B) they're uncoordinated.

Whenever I speak at clinics I can always tell the people who don't like what I'm saying because they lean back in the chair with their arms crossed, frowning disapprovingly.

Is running not a thing now?

What should you be spending your time doing at practice?

Well, coach, you can have the answers to all of these questions, and many more...

Because Kebba Tolbert's new program 'Specific Endurance Development in Sprints and Hurdles: An Advanced Approach' eliminates all mystery and confusion about this component of your workout planning.

Before I show you what the program is all about, take a look at some of Coach Tolbert's coaching credentials. For the sake of saving space, here is what he achieved last year alone:

Tolbert was again named the USTFCCCA Northeast Region Assistant Coach of the Year for the outdoor campaign, his third in-a-row. 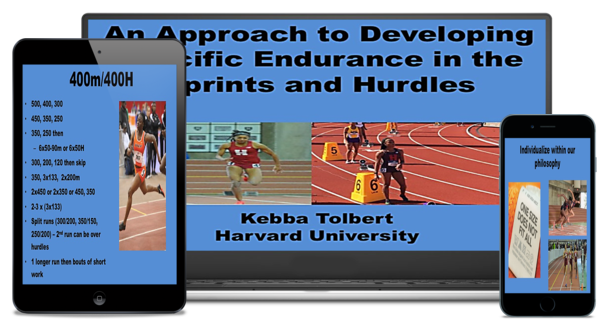 Here Is What You Get When You Get Started Today...

Over the course of 2+ hours of instruction, Kebba takes you through the full range of training factors, key performance indicators, and base building activities serving as the foundation of your program design decision making process.

He then shows you exactly how to progress specific endurance workouts from general prep to special prep and the competition season, using dozens of specific examples in each of the sprints and hurdles events: 100, 100H/110H, 200, 400, 400H, and your primary event 100/200 runners who also run on the 4x4 team!

Here Kebba spends one hour and 50 minutes diving deeper into specific questions arising from the topics covered in Core Component #1. I asked him the questions I would want answers to and he delivered.

Speed drills don't make you faster, but they provide context for what you want them to do on the track. Component #1 are the drills. This part is the block work and fly runs.

The program contains a lot of video showing athletes performing drills, exercises, and workouts of different types. It's not just talking with static PowerPoint slides or a recording of a coach giving a seminar lecture. So you'll want to watch the program.

But, you're a busy person. So I provided all 4 hours of video content broken up into 7 different audio files. Now you can listen when you're on the go and refer back to the videos when you have time.

Kebba gives multiple dozens of workouts throughout the course of the program.

But, I know how much coaches like to see sample programs. So I'm giving you a series of microcycles Kebba actually used. They're each from the same week of training, but over multiple seasons.

Now you can see how Kebba modified that training cycle over time and for multiple training phases. It's pretty cool. I stared at them for a long time when I first got them.

Get These Limited Time Bonuses When You Order Today

You don't want to guess. And you won't have to. Because if you order during this launch window, you'll get lifetime Q&A support through our secure, members only website.

You'll want to pick Kebba's brain because he is really good at coaching and explaining. And you're going to be changing multiple elements of your program.

This is a book Kebba edited and put together several years ago. It consists of 10 articles on various sprints and hurdles related topics including energy system development, programming plyos, teaching sprints technique, and strategies for teaching and developing inexperienced hurdlers.

You'll also get pacing charts for 150-500m and both hurdle events.

Of course I'm not going to ask you to shell out that kind of money to access all of these materials and resources.

I point out the value so you'll understand we are trying to over deliver with this offer by putting as much information in your hands as we possibly can. We want to help you help your sprinters and hurdlers.

And Kebba Tolbert's 'Specific Endurance Development for Sprints and Hurdles: An Advanced Approach' is the coaching resource you need most right now. 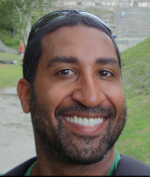 "At Complete Track and Field, we stand by the quality of our information products. If you're not completely satisfied with this program, simply request a refund within 90 days of your purchase and we'll give you back every penny you paid. No hassle. No questions asked."